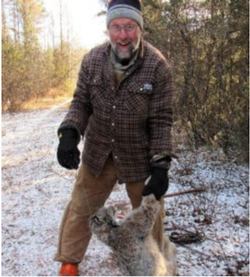 In 2013, Don retired from Lakehead University after 40 years of service, where he worked to develop their first fish and wildlife program within the Faculty of Natural Resources Management.  Over the years, he has made every effort to become involved in wildlife proposals with special emphasis on furbearer biology and management. In 1997, he completed a Master of Science degree researching and publishing on beaver dam ecology. He has been a professional trapper in northwestern Ontario for 53 years. This practical perspective, coupled with his academic background at Lakehead, has allowed him a unique opportunity to interact with students, trappers, First Nations, forest companies, and the Ministry of Natural Resources and Forestry (MNRF) in many research and management initiatives.

Being a university educator and a member of The Wildlife Society (TWS), both since 1974, his interest has always centred on student involvement culminating with his mentorship of the TWS Student Chapter at Lakehead University. He has maintained professional status within TWS by receiving CWB designation in 1999.  Don has been involved in such working groups (WGs) as the College and University Education WG and the Native Peoples Wildlife WG. Currently, he is a member of the Hunting, Trapping, and Conservation WG. Don is also a Director with the Northwestern Ontario Fur Trappers Association (NWFTA), the Trapper Representative and member of the Forest Management Team for the MNRF’s Dog River Matawin Local Citizens Advisory Committee. fDon holds memberships with the Ontario Fur Managers Federation (OFMF), Ontario Federation of Anglers and Hunters (OFAH), and the Northern Ontario Sportsman Alliance (NOSA).